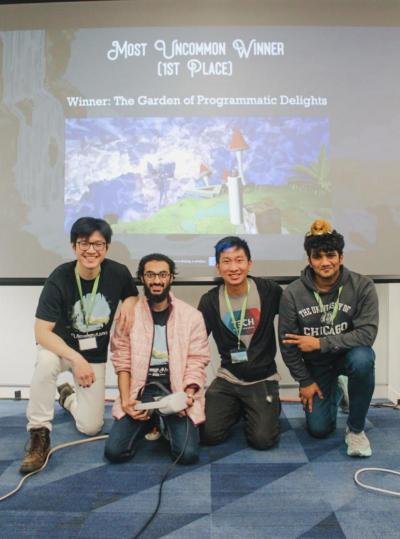 We are excited to announce that an all MPCS team was the overall winner from the 2022 Uncommon Hacks weekend, the official hackathon of the University of Chicago organized with Major League Hacking (MLH)!

The April hackathon brought together over 200 students from the university and around the world to compete in a 24-hour contest to build fun, innovative, and “uncommon” projects. 30 projects were ultimately submitted by different teams.

Their project, “The Garden of Programmatic Delights”,  explored the intersection of VR and programmatic art. More details and a quick video demo can be found at the project page here: https://devpost.com/software/beautiful-art-paradise-take-me-to-the-paradise-city-where-th

Did you have a background in CS prior to joining the MPCS?

Shrikanth: Me too - BTech in Computer Science, SRM Institute of Science and Technology.

Hayder, Ruoda: No, we came from different backgrounds.

Congratulations on winning the 2022 Uncommon Hacks! Can you describe your team’s project?

Shrikanth: Our final project submission was a VR programmatic art experience called “The Paradise of Programmatic Delights”. This project was an attempt at modern interpretivism of contemporary art, and we derived our inspiration from "The Garden of Earthly Delights'' by Hieronymus Bosch. The audience is on a lush, floating island, which is nestled in a fractal sea of clouds (including an airship). The island features 3 small ponds, each with a corresponding floating ring and cube. Dropping the cube through the ring and into the pond generates a sequence of patterned objects, all programmatically generated based on mathematical functions.

Hayder: This project was a 3D art rendition built on the POV of the player. The user’s hand movements and gestures are tracked by the Quest 2’s inside-out cameras. This facilitated a mechanism for the user to interact with objects in the VR space without a controller. The ability to freely manipulate objects in the virtual environment helped us reimagine the project as an intersection of art and game design.

How did you go about building it? Any highlights?

Ruoda: Alan and I are in the Human Computer Integration Lab, led by Professor Pedro Lopes. There, we do a lot of experimental research involving VR, so it felt natural extending our experience with Unity and Oculus development for this project. After implementing and testing the hand tracking, we built the scene using different assets and primitives from Unity’s core graphic features and Sketchfab, then created player-driven events that trigger the generation and motion of objects based on aesthetically-pleasing mathematical algorithms.

Alan: One of the highlights of working on this project was just being able to have fun with a short-term VR project and see immediate results. Much of my previous experience with VR has been highly experimental and drawn out over long periods of time, so it was fun to just sit down and create something artistic that people can immediately enjoy. A lot of people never experienced VR before, and even fewer with scenes involving true hand tracking, so it was really rewarding to see the excited reactions of hackathon participants demo our scene.

What challenges did your team face while working on this project?

Alan: Dealing with the logistics of our VR headset was a big risk and challenge. In my research work, one of the biggest time sinks is getting unity projects to run and build on any one of the variety of VR devices out there. Therefore, choosing to make a VR project was incredibly risky and certainly felt like a wrong decision at many times throughout the hackathon.

Ruoda: I’ve had similar experiences - debugging Unity projects can get very tricky, particularly when it comes to correctly rendering imported assets and making sure scene objects play nicely with each other and the physics engine. Because we had a good feel for what’s possible and where we might struggle, our team was able to modularize much of our project development lifecycle to include conservative, realistic, and stretch goals. There were features such as spatial audio that we had to leave out due to time constraints, but I feel we made the right tradeoffs by the time we submitted the project.

What would you say to prospective or current students who are interested in competing in Uncommon Hacks in the future?

Hayder: 100% do it! This is the official hackathon of the university, and you won’t have many chances to do it while you’re here. You’ll get to translate what you learn in the classroom into a real project, gain experience building something competitive in a team environment, practice setting deliverables with unprescribed solutions, and engage a community of passionate computer science students. Most importantly, you build a special bond with your team.

Alan: I would highly recommend it; not for the prizes, not for the food, but for the sheer joy of technical and creative exploration on an engineering topic that you’re passionate about. I also believe that participating in a hackathon shows that you can find simple solutions to complex problems, take risks under time pressure, and work within a team of developers.

What advice would you give to people who want to win next year?

Shrikanth: Don’t be afraid to make a weird project! It’s called Uncommon Hacks for a reason. Also, have fun and keep a light-hearted environment with your team throughout the weekend. What I loved about our team was that we had a great chemistry through-and-through. Even when we were working past midnight, we were laughing at each others’ jokes and motivating each other. On a more serious note, prepare a team ahead of time and identify one major strength in application development that you can bring to the table.

Any advice for those thinking about joining the MPCS to earn a MS in Computer Science?

Ruoda: I would highly recommend the MPCS. If you choose to challenge yourself, you can dive deep into whatever field of computer science you want to go into. While you’re here, look for opportunities beyond the classroom - whether it’s competing in a hackathon, joining a specialized research lab, or building side projects with others, these other experiences are just as valuable for building camaraderie and learning new skills.

Hayder: I cannot recommend it highly enough! The students and faculty at MPCS foster a great attitude of helping each other be the best version of themselves. This is a great place to get proficient at computer science no matter what background you come from.

Shrikanth: My time at UChicago has been nothing but positive. I know that choosing to pursue a master's degree is a big decision in your life, even more so if you have to travel halfway around the world to do it, but MPCS has made me feel at home every step of the way.